Deployment is one of the biggest challenges for a military family and Unit welfare teams are helping thousands of children by including a Little Troopers Separation Pack in the pack of information that they distribute. The Little Troopers Separation Pack was one of the first resources that our charity created and many welfare teams from across the UK Armed Forces place bulk orders when units are deployed.

The Separation Pack is full of resources including, a countdown chart, world map, stickers and other really useful activities for both the child and the parent such as a separation diary, postcard pack and information booklet. They are also undated so they can be used at any time of year. We spoke to three welfare teams who told us how they have been using the packs with their families:

Flight Sergeant, Jane Corban, the community support officer, explains: “The squadrons at Brize Norton are very active and are always being sent overseas so we’re a very busy team and are always looking for new ways to engage with and support our families. Little Troopers Separation Pack is a really easy resource for us to use and have proved really popular with families. We distribute them to families as part of our pre-deployment information as well as giving them to any children struggling with separation due to military exercises or living unaccompanied.

“The feedback from families has been excellent and parents now know to come and ask for one if they have a period of separation coming up. The pack has lots of great activities to help children feel special and keep them occupied while their parent is away. It’s been particularly invaluable during lockdown when we haven’t been able to host our usual family lunches and other events.”

Captain Roy Cousin, the Unit Welfare Officer, told us: “We found out about the Little Troopers separation packs when one of our soldiers bought a pack for his children and the mum mentioned it to us while he was away. It comes as one pack, which makes it easy to distribute.

“We’ve had a really busy 12 months with lots of units deploying so this gave us a tangible resource that we could hand out to all families as part of our ongoing welfare support. We gave out one pack per family and siblings have enjoyed sharing and engaging with the resources. It’s been particularly useful over the pandemic as usually we’d hold monthly events to bring families together and keep them occupied but we haven’t been able to do that. The feedback has been really positive with lots of parents telling us that their children really looked forward to the activities and it has helped keep them connected with the parent that is serving away.”

16 Medical Regiment, Merville Barracks – Gemma Bignall, the Welfare Clerk at Merville Barracks, has distributed 40 packs to medics who were deployed in May 2021. The team now keep the packs in stock and distribute them to any families who need the extra support – not just those who are experiencing long deployments.

She told us: “I think the Little Troopers Separation Pack is one of the best things available to support families. It helps children understand what to expect, it gives them the opportunity to talk about their feelings and it also gives the serving parent the chance to chat to their child about where they are going and how they will stay connected. That responsibility shouldn’t just sit with the parent that is staying at home.

“When I came into post in Colchester we didn’t have anything like this to give to families and because we have lots of deployments at the Garrison it seemed like the perfect solution. We’ve only been using them for a few months but already families have heard that we have them and are contacting us to request them. We don’t limit them to deployments as I think it’s really important that families have access to them however long the serving parent is away for. To a child, a few weeks separation from their parent can be just as tough as a long deployment, so if their parents think that a Little Troopers Separation Pack can help then we’re very happy to give them out.”

Gemma knew about the pack as she had ordered one for her daughter she added: “The pack really helped my little girl. Before her Dad was deployed, they sat down with the world map and had some quality time together – talking about happy memories of where in the world we’ve been on holiday as a family, where we’ve lived and putting stickers on the map – before talking about the deployment and where Daddy was going.

“Every day he was away she loved doing the chuff chart and it helped alleviate her anxiety about how long it was until Daddy was coming home. She also stuck the hero frame next to her bed and chatted to Daddy every night.”

You can order a Separation Pack here. Little Troopers is able to offer welfare teams a discount on bulk orders of separation packs, you can email us to find out more. 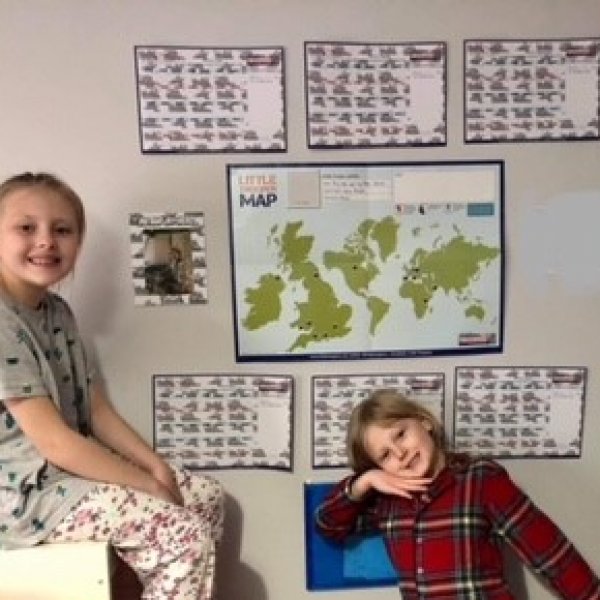