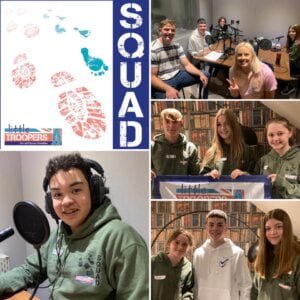 Little Troopers has launched a brand-new podcast called SQUAD featuring lots of military teenagers talking about their experiences of growing up in the military community. Across eight episodes we are speaking to 15 teens who all have a different story to tell.

Presented by TV & radio broadcaster and mental health ambassador, Katie Thistleton and Leicester Tigers rugby star, Thom Smith – who’s Dad still serves in the Royal Air Force – the eight-episode weekly podcast is the first of its kind to hand over the microphone to military teens.

Louise, Founder of our charity, explains: “It’s so important to our charity that people don’t forget about military teenagers. This podcast gives them the chance to have a voice and hear from each other about their experiences of military life. We are thrilled to have Katie Thistleton and Thom Smith presenting SQUAD and it’s been produced in a format that teenagers will find really relatable and engaging. We hope that lots of military teens will listen to the podcasts at home and that secondary schools will also find value in bringing their military children together to listen in class and use it to spark further conversation about military life in school.”

Recorded as short 20-minute weekly episodes, listeners will hear from 15 military teenagers across the series as they chat about their personal experiences of being a service child. They share their views on some of the unique challenges that they face including deployment and separation, schooling, moving home, having a serving parent and forming friendships.

Funded by the Armed Forces Covenant as part of the Little Troopers at School project. The aim of the podcast is to help military teenagers across the British Armed Forces community feel recognised and understood by hearing from other children who live in similar circumstances.

Charlotte aged 15 who took part in the series said: “I think the podcast is a brilliant idea for military children to share their experiences and let each other know that there is a whole community out there of people going through the same things. None of us choose to be military children but I think we all try to make the most of it and we know what a good job our parents do. I’ve had some brilliant experiences as well as a few tougher ones, so I’m looking forward to sharing my stories and representing some of the many friends I have met living on base, off base and overseas.”

Presenter, Katie Thistleton, adds: “I’ve loved hosting the SQUAD podcast. It’s been fantastic to meet so many inspiring young people who have grown-up in an Armed Forces family and to give them a platform where they can share their stories and chat about what life is like from their point of view. Thom and I have been the presenters, but SQUAD is all about military teens. It’s their podcast and they have led the conversation in a really fun, honest and relatable way that will resonate with the thousands of other teenagers across the British Armed Forces community who share similar experiences. I hope everyone enjoys listening to it as much as we have enjoyed recording it and that it helps other military teens realise, they are part of an amazing community of young people just like them.”

Presenter Thom Smith, adds: “Hosting SQUAD with Katie was a fantastic experience and I’m so excited to be working alongside Little Troopers. Growing up in a military family myself, I appreciate the highs and lows we encounter as children of military parents/carers. It was fascinating to listen to the teenagers tell their stories and share their experiences of military life. I believe that having a platform for military children to relate to, that also informs the wider community of our unique lifestyle is invaluable and I’m immensely proud to be a part of it.”

The first episode of SQUAD is out now. You can listen to them here or subscribe and follow wherever you get your podcasts. 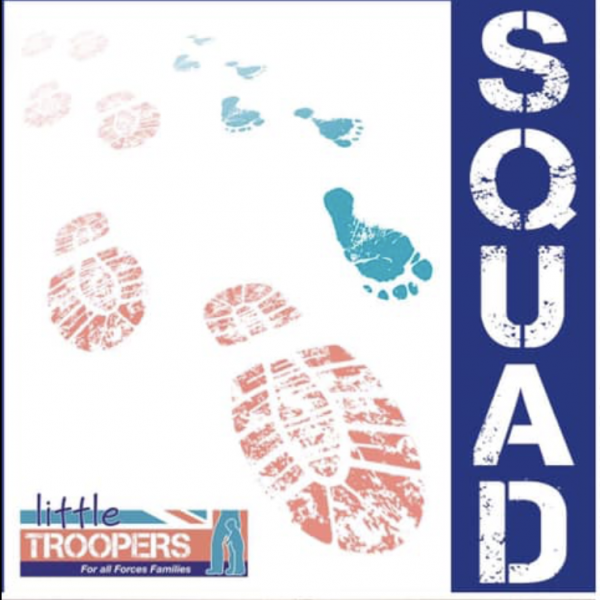