A really lovely guest post giving an insight into the raw reality of military life, the twists and turns it came take us on and how these hurdles can come when we least expect them. Louise xx

I’m married to a Royal Navy Officer and having been very lucky to never have lived apart in the seven years we’ve been together……..2018 is the year we go all in with the military family way of life!

In January my husband started a 6-month operational tour and I became a single-mum to our daughter (3) and son (1).  The adjustment to our new way of life has been a struggle, particularly as our son decided at about the same time my husband left that he hates sleep and therefore wants to minimise it as much as possible.  I also got tonsillitis within the first fortnight so those early weeks were nothing short of hell.

I do think that now (16 weeks in) we’re finding our stride.  I make sure we have at least one significant activity planned each day so that the kids aren’t bored and are therefore much easier to deal with!  It also helps me see that the time ahead will pass and that there might be an end in sight.  The weekends are particularly tricky as there’s less routine and a lot of my mum friends are, understandably, busy with their own families so this is the time I miss my husband the most.

Routine is your friend as a single parent (as a joint parent too but more so on your own) but it’s also a poisoned chalice, it makes kids more comfortable but also makes life a bit monotonous. 6pm-7.30pm is the same routine every…single……night.  Bath. Pjs.  Stories. Milk. Bed.  Every night.

The weekends are also when I feel most hard done by – in a previous life we would take turns getting up early with the kids so the other could grab a bit more shut-eye, now there is just me and I’m as likely to get a 6am (or worse) wake up call on a Sunday as a Tuesday.  Coffee has never tasted so good.

So the routine is established, great.  My husband comes home for R&R leave in just over a week… I’m literally giddy at the thought of seeing him and not relying on decent WiFi to hold a conversation but…and it’s a big but… I’m also a bit apprehensive.  I have lots of questions: We’ve learned to live apart for four months, will we still get on? We used to speak to each other with a quick glance over the kids’ heads… will we still ‘get’ each other?  Will he understand the new routine?  Will he drive me crazy leaving dishes in the sink? The answer to that last one is probably yes, the rest I don’t really know.

We’ve never had to live apart before so we’ve never had to do the big reunion and adjustment.  I guess I’m worried we’ll spend the whole time adjusting then he’ll leave again.  Thankfully, we’ve planned his R&R so that he only has 8 weeks to do on the other side.  If you’d asked me at the start if I could survive 8 weeks I would’ve been very skeptical but now it seems like a walk in the park.  Perhaps a very windy park with lots of hills but a walk in the park nonetheless.

We’ve also got a lot to discuss and do when he’s home.  His next posting is in the USA so we are all moving overseas only a month after his tour is over, that means a lot/all of the organising and planning will be down to me.  Don’t get me wrong, I’m an organiser – give me a spreadsheet and checklist any day but I’m feeling the weight of responsibility, particularly in making sure the kids are mentally prepared for the big move.

Our daughter is excited but she does think she will be able to jump in the car to visit her grandparents in half an hour so that might take a bit more explaining.  I do think her Daddy being away is preparing her for long distance relationships with friends and family though, she’s well accustomed to video chats and even our youngest, now 18 months, knows Daddy is about to appear when he sees himself in my phone before it connects.

So our 2018 is very much a game of two halves;  first six months living apart and second six months moving to a new country, together.  If you’d told the single me of eight years ago that I would happily and willingly move thousands of miles away from my friends and family and be a military wife, I would’ve laughed until I cried.  The married me of now is massively excited about the adventure ahead, not just for my husband and I but for my kids who’ll get to experience another country and everything that brings for them.  Now, if I can just get the admin out of the way so we can get on with the adventure… 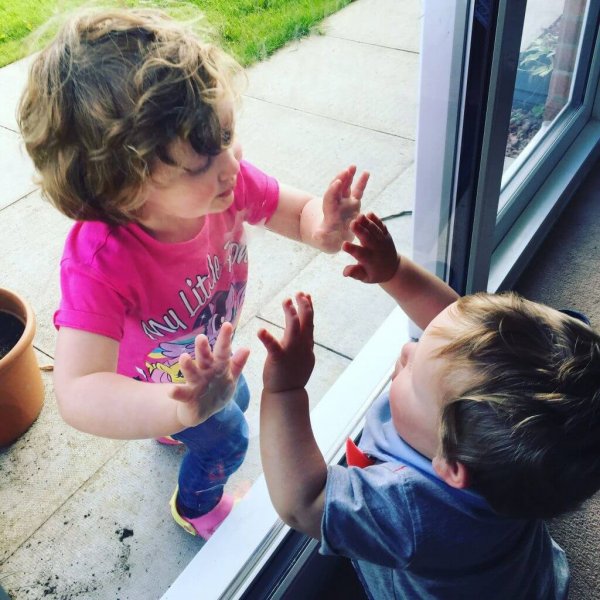